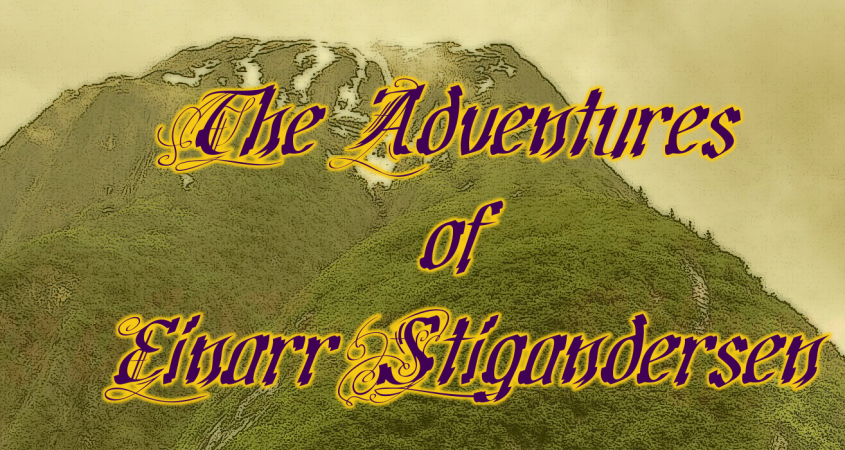 Author’s Note: My apologies for the lateness of the post. I realized at the eleventh hour that the chapter as I had started it needed to come later.

The three ships with their three tails made good progress toward the outlying island of Eskihus, where Einarr had once spent half of an idyllic summer with Grimhildr’s parents. Ulfr’s men kept steady pace with them, and Einarr had no doubt that if they wished to catch up, they could. So then, why did they wait?

Einarr shook his head. He knew the answer to that: the wolves were wearing them down even when they weren’t in combat. But it wouldn’t matter for much longer: Eskihus village was just a few hours’ further ahead. Assuming these ‘wolves’ were more than merely rabid dogs, gaining the harbor should also gain them some much-needed respite.

Moments later his hopes were dashed. Another ship sailed into view from where she had been laying in wait, the wolf on its prow plain to see. Before words could make it to his mouth he had snatched the horn off his belt and sounded the alarm himself. A chorus of other horns joined in: he looked behind them once more, only to see the three ships led by Kaldr closing in.

“To arms!” How had Kaldr known they would come here? The fourth ship proved that he had, somehow.

Even as he worried, though, Naudrek was helping him into his maille as Jorir checked Sinmora’s blade for any damage. He wouldn’t find any: the edge seemed preternaturally resilient since the sword began eating magic.

“Archers! Form up!” He called as he fitted his own helmet to his head. When the wolflings had assaulted them before, they had been lucky and he hadn’t needed to fire. This time, he didn’t see a way around it. The dwarf returned his sword even as he echoed the order.

“How many volleys do you think we have?”

“I knew that. I need your best estimate.”

“Five, maybe? Maybe six? It’s not this fight I’m worried about, it’s the next one.”

Einarr nodded. “That makes us both.” He raised his voice again to bellow at his crew. “Do not – I repeat do not – allow yourselves to be tempted into recklessness here! Concentrate your energy on keeping them from gaining our deck.”

Irding snorted. Einarr hoped he would remember that in the thick of battle. Hoped, but did not expect. He would have gone on, but there was no more time. The enemy was in bowshot.

As the sound of the enemy loosing reached his ears, Einarr gave the order to “Fire!”

Arrows whizzed past each other in the air to rain on deck and sea alike. On the Heidrun, Einarr heard the characteristic thunk of several sticking fast in shield and deck. No-one cried out – this time. “Draw!”

Could he afford a second volley? No time to second-guess now. “Fire!”

Again the arrows flew in all directions. Someone cursed: by the sound wounded, but not badly. Not that he could really afford even that, at the moment. Eydri’s battle-chant rose over the deck.

As though on cue, boarding lines flew from the deck of the wolfling ships toward the Vidofnir and her allies. “Hard about! Now!”

Tyr leaned hard on the tiller and the Heidrun turned about as quickly as she could. It helped, at least: several of the thrown lines landed with a splash in the water. Those who were not on the oars rushed forward to cut at the lines that did take hold.

One glance toward the island told Einarr they would not break through that way. The new ship was near enough to intercept anything they might try in that direction. One of the original three appeared to be circling to join her, as well.

Behind them, Kaldr and the other of his original ships came in under full sail and rowing. Can’t go that way.

He shook his head. Eydri’s song was starting to get to him, and he could not allow that. Not if any of them were going to survive outside Ulfr’s dungeon.

The Vidofnir and the Eikthyrnir were under heavy arrow fire from the onrushing drakken. No surprise, that: they would want Father and the Vidofnir most of all. He could try to push through that way…

No good. We’d just get tangled up.

That only left one direction to go: south. “Sternwise, men! Row!”

The Heidrun shot through the gap. The Vidofnir did not follow: she was caught by the wolfling ship. Einarr frowned, then jogged back to speak with Tyr at the rudder. “Can you get us around behind them?”

Einarr looked up. In that brief moment, the last of the boarding lines had fallen from his father’s ship. They plowed forward, away from Einarr and the Heidrun.

“To catch up, evidently.”

A wry smile tugged at Tyr’s mouth as leaned into the tiller once more. “As you say.”

The ship which had come to join the forward anvil changed course now, cutting across the path of its sister ships to pursue the Vidofnir.

Einarr signalled for the cadence drum to play at full speed.

A horn sounded from one of the wolfling ships, sharp and urgent. Not one of them changed course.

The horn sounded again, and again nothing happened. The wolfling was getting far too close to the Vidofnir for Einarr’s liking, but he could coax no more speed from fatigued men at the oars.

A third time the horn sounded. Reluctantly, grudgingly, the ship slowed itself and moved to rejoin its fellows. What was that all about?

There would be time to question it later. For now, he needed to rejoin his allies, as well.

Hi everyone. Thanks for reading!

If you like what you read, it would really mean a lot to me if you clicked through to Top Web Fiction and voted for Einarr there. It’s a visibility boost in the ever-growing genre of web fiction, and that helps me out a lot. There’s no sign-up, and votes refresh every 7 days.

If you’re all caught up and looking for something a little longer to read, I also have other works available on Amazon.Or, if you happen to not like Amazon you can also get the Einarr ebook through Draft2Digital, B&N, Apple, Kobo… you get the idea. Direct links are available here.

Lastly, if you really like what I’m doing, I also have a Patreon account running with some fun bonuses available.

This site uses Akismet to reduce spam. Learn how your comment data is processed.

Buy me a coffee to help fuel the writer's brain and keep the stories coming!

More ways to support the author

Little flecks of inspiration and creativity

Musings and books from a grunty overthinker

Celebrating food and all the joy that comes from creating and eating it.

Smile! You’re at the best WordPress.com site ever

Explorations in the world of Indie Publishing

Taking over the world and leaving it ruthlessly alone